CORTLAND, N.Y. – Big Tobacco has known the power of the media for decades and has a long history with the entertainment industry.

The tobacco industry uses tobacco imagery and brand identification on screen to both normalize and glamorize tobacco use. Teens consume more media than ever, watching an average of almost 11 hours of media in any given day.

Actions that would eliminate the depiction of tobacco use in movies could have a significant effect on preventing youth from becoming tobacco users. PG-13 movies are the biggest concern since they account for a majority of on-screen smoking.

Knowing that tobacco imagery in youth-rated movies is a cause of youth smoking, it is time to take action. Reality Check has partnered with the Cortland City Youth Bureau to bring Cortland this year’s Movie Under the Stars series showing only smoke-free movies!

Cortland City Youth Bureau has unveiled its lineup for the 2015 edition of its annual outdoor movies series, held on Wednesdays in Court House Park in the City of Cortland.

This year’s series will be kicked off on Wednesday, July 8 featuring smoke-free, family friendly movies.

Movies will begin at dusk. The rain location will be held in the County Office Building Gym.

For more than 10 years, Reality Check has been working to get Hollywood to eliminate smoking in youth- rated movies by using an “R” rating. Movies with smoking will cause 6.4 million of today’s children and teens to become smokers. Visit the Reality Check table at Court House Park before each movie to help support this initiative. 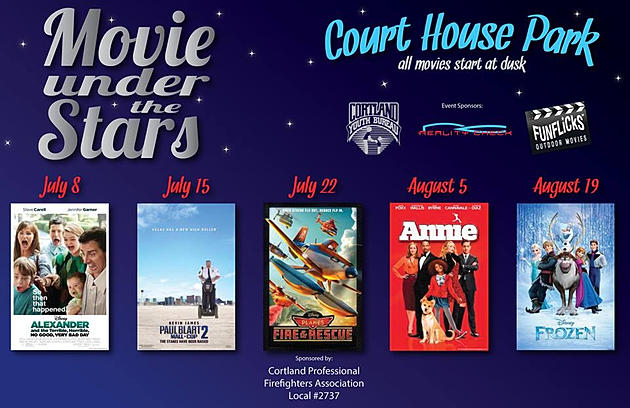