Home›Featured›Cargill mine still closed; trucks allowed to use surface stockpiles of salt

LANSING, N.Y. – The Cargill salt mine in Lansing is still closed, five days after 17 workers were stuck in a shaft for about 10 hours, an official said.

Trucks are being permitted to use above surface stockpiles of salt for the first time since Wednesday night's incident, according to spokesman Mark Klein. He said it is unclear when the mine will reopen.

On Wednesday, 17 workers starting the third shift at the mines became trapped about 900 feet down the 2,300-foot shaft.  They were tapped for about 10 hours before a crane was used to rescue them.

Related: 17 workers rescued at Cargill salt mine in Lansing

According to records from the U.S. Mine Safety and Health Administration, the same elevator, Hoist #3, failed just five days before the workers were stranded.

Klein said in an email, though, that original suggestions that a support beam may have come out of place, preventing the elevator from moving, still seems like the most probable cause for the incident.

"Anytime if we think power to the elevator will be out for more than a half hour, we let MSHA know. It ended up not being out that long, but better to report than not," Klein said about the elevator failure reported in Hoist #3 on Jan 2. "What we are looking at now is a structural or mechanical issue, rather than being related to electrical."

Related: Photo Gallery - On scene at the Cargill salt mine

Amy Louviere, a spokeswoman for the Mine Safety and Health Administration, said Thursday that an inspector, field officer supervisor, several tech support experts, and shaft and elevator subject matter experts are part of investigating what caused the elevator failure.

"Malfunction of these elevators are not uncommon," she said, but what made the Lansing situation different from other failures was the number or people stuck and the amount of time it took to rescue them. 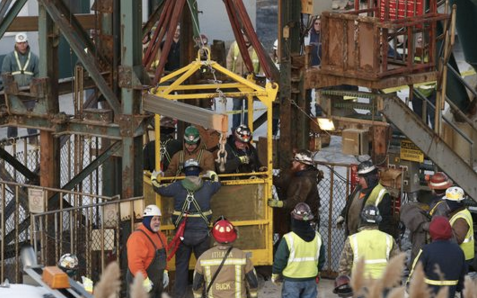