CORTLAND, N.Y. – The City of Cortland Police Department recognized the accomplishments of several of its officers at a ceremony Thursday at city hall.

Police Chief Michael Catalano presented the awards to officers, sergeants and lieutenants in the police department.

"This past year has been challenging not just for us at the police department, but for all police officers who are under tremendous scrutiny," Catalano said. "Use of force incidents are blown out of proportion, and some people think all the police do is go out and shoot people for no reason. That couldn't be farther from the truth." 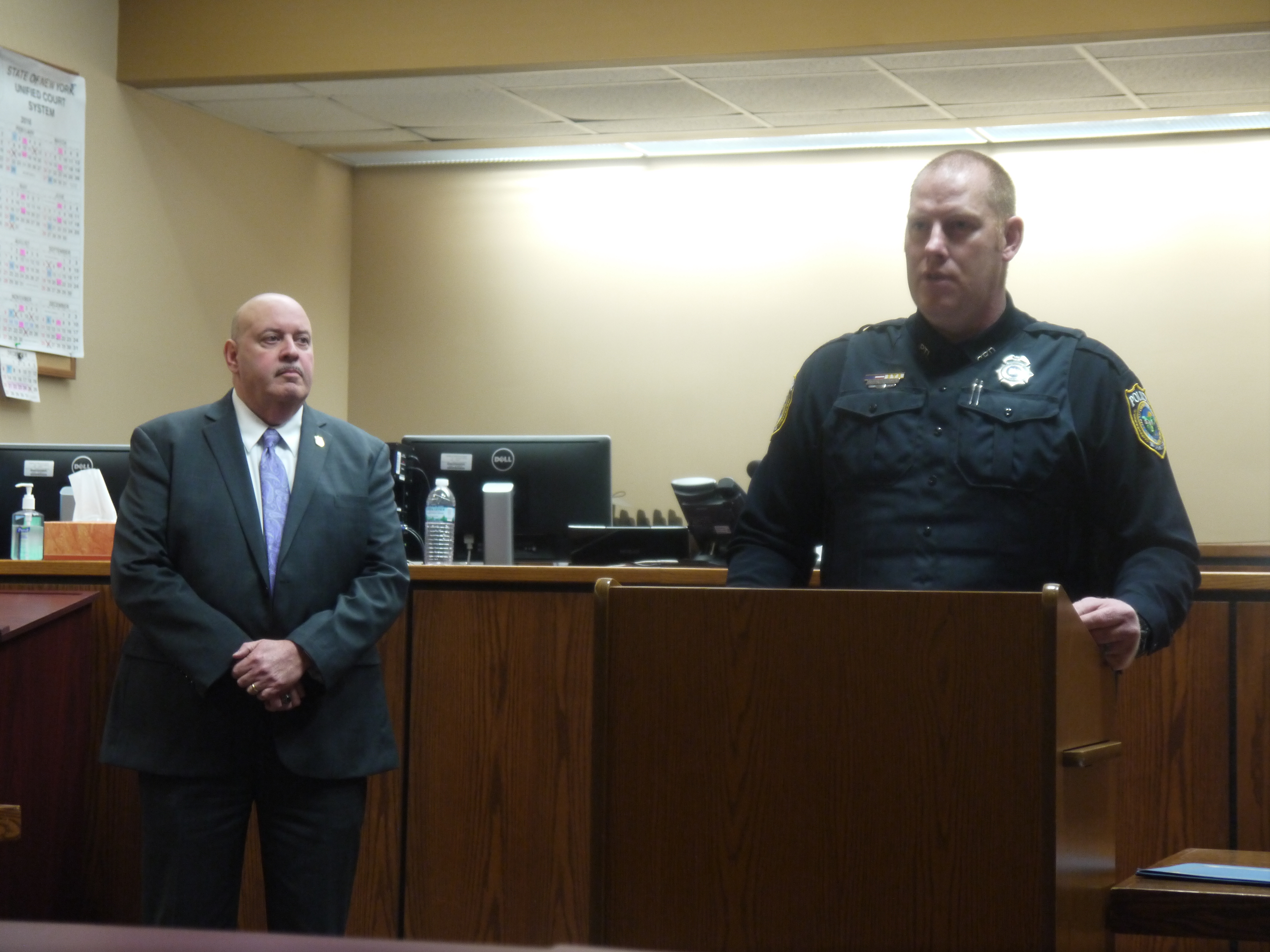 Here's a partial list of some of the award recipients:

Sgt. Michael Strangeway and Sgt. Elizabeth Starr – Investigated a Dec. 2014 homicide at the Northcliffe Apartments which led to the arrest of Randy Wilkinson. Wilkinson's case continues to move through the court system. Sgts. Strangeway and Starr also assisted in a May 2015 homicide investigation into the death of 16-year-old Amie Leland that recently led to a conviction.

Officer Melissa Eccleston – Initiated a traffic stop July 3 that led to the seizure of drugs and money. On the same day, Eccleston helped arrest a man who was found to be in possession of an unregistered assault rifle.

Officer Ken Bush – In Dec. 2014, Officer Bush tracked down a drug package that was sent to a SUNY Cortland student. His investigation led to the seizure of drugs, paraphernalia and cash, and the student was later expelled from the college.

Sgt. Dan Johnson and Sgt. Michael Strangeway – Investigated a homicide investigation at the Palm Gardens bar on Elm Street. "They're being commended for their excellent interview skills in that investigation and obtaining a confession," Catalano said.

Officers Dan Edwards and Steve White – Investigated Dec. 1 assault of elderly woman on Main Street that would lead to an arrest. "The key to this investigation was the investigative skills and intuition of Officer White," Catalano said. "Then we put the hound dog on it, Sgt. Edwards ... and an arrest was made in that case. It was a senseless, crazy random act that you don't see all the time."

Exemplary Officer Award – Officer Adam Troyer was recognized by the City of Cortland Police Department Police Benevolent Association for being a "positive role model ... who respects his fellow officers and his community." He was also described as being "dedicated to his work, and his eBay side job."

Award of Valor – In Dec. 2014, Officers Adam Troyer and Jared Aiken responded to a house on fire on Madison Street and recognized a person inside the home. "They disregarded their own safety and broke in and rescued the man," Chief Catalano said. The elderly man was badly burned and would die in the hospital eight days later. "He had at least a fighting chance because of these officers, and they put themselves in great danger to do that."

Officer Tony Natoli – In May 2015, Officer Natoli was called to a home on Groton Avenue for a male who overdosed on heroin. Upon arrival, he administered Narcan–a drug used to revive patients from an opioid overdose–and brought the man back from the brink of death, Catalano said.

Officers Melissa Eccleston and Steve White – In June 2015, Officers Eccleston and White responded to the sidewalk in front of Main Street for a male subject who was bleeding heavily from his arm. Officer White applied a tourniquet in an attempt to stop blood loss, and the officers were able to save the man's life.

Sgt. Cheyenne Cute and Officer Nate Moran – In June 2015, the pair responded to an apartment on James Street for an unresponsive male who was barely breathing and unconscious. They administered naloxone and brought him back to life, Chief Catalano said.

Officer Ryan Gross – In July 2015, Officer Gross responded to 44 Rickard Street regarding a heroin overdose. The person was believed to be dead. They administered naloxone twice in an effort to save the man's life.

Officer Adam Troyer – In November, Troyer was called to a home on Port Watson Street for a reported heroin overdose. He administered Narcan and successfully saved the man's life.

Lt. Richard Troyer – Between August 2014 and November 2015, the City of Cortland Police Department investigated four homicide investigations. Each of those investigations was commanded and supervised by Lt. Troyer, and each concluded with the apprehension of a suspect.

Detective Sgt. Dan Edwards, Police Officer of the Year Award – Sgt. Edwards was selected for the award for his assistance in several homicide investigations that he was not assigned to, Chief Catalano said. 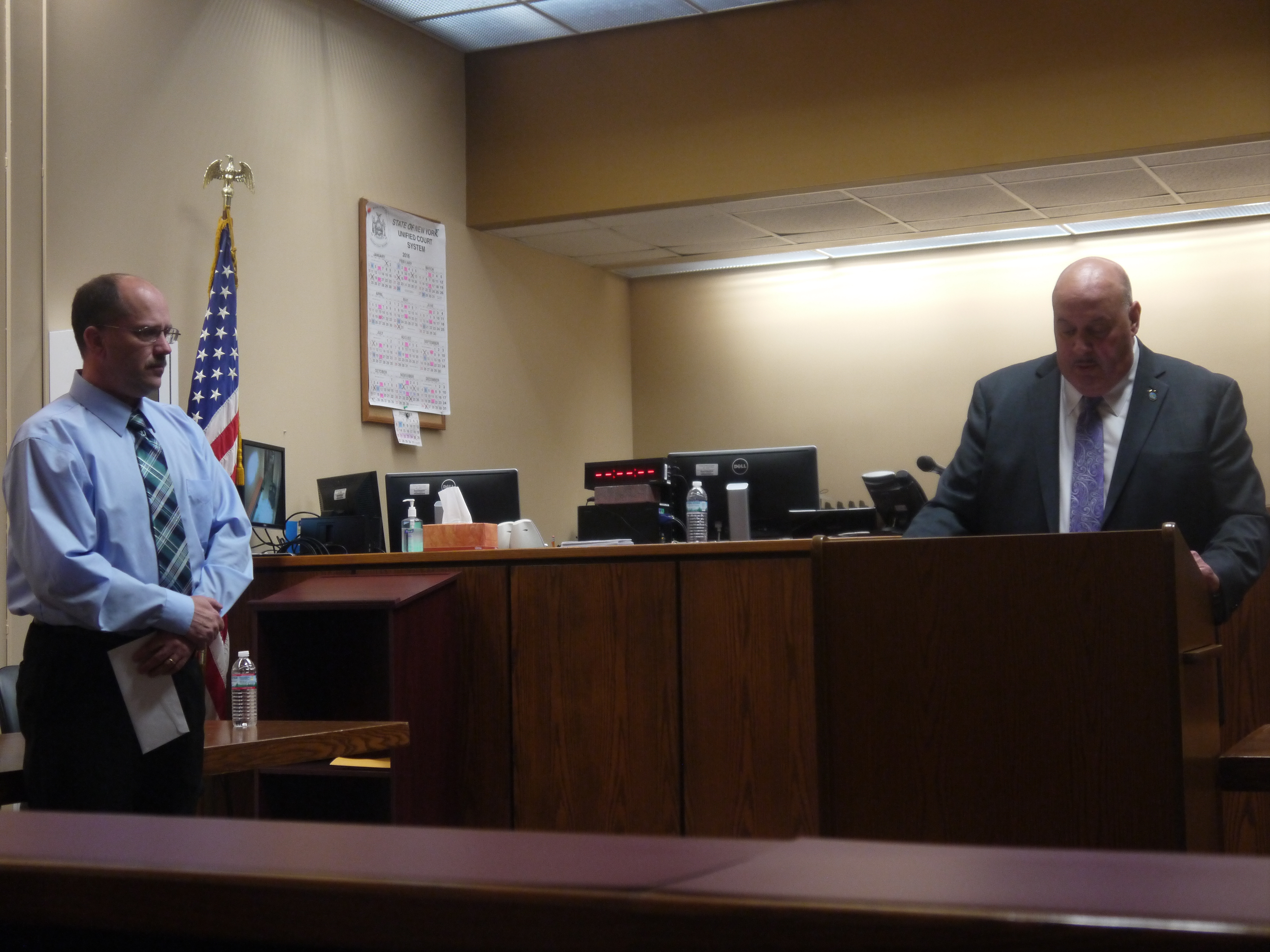