Robert Galm doesn’t have many regrets about his college experience. The junior communication studies major has excelled academically — earning high marks in his classes, interviewing for nationally competitive internships and building a reputation as the student voice of SUNY Cortland athletics.

But last spring, the Pine Plains, N.Y., native regretted not being able to return home for an annual walk supporting multiple sclerosis (MS) research, one that his family started in 1999 after his mother, Barbara, was diagnosed with the neurological disease. Broadcasting and schoolwork commitments kept him in Cortland, forcing him to miss the event for the first time since he was 4 years old.

“That hit me close to home,” said Galm, who still led an impromptu walk in 2015 from his DeGroat Hall residence with 20 or so friends. “I was here and my whole family was walking it at home. I hadn’t missed one for as long as I could remember.”

This year, he’s again committed to calling several weekend athletic contests because the College will host SUNYAC Tournament action across four spring sports. Unlike last year, however, there’s no regret. 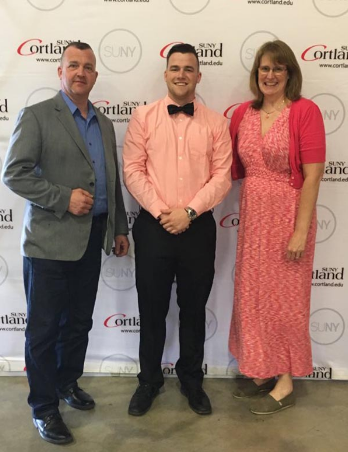 Robert Galm, center, with his parents, Jeffrey and Barbara. After organizing a successful MS walk for many years near his home in Pine Plains, N.Y., the family will walk in Cortland on Sunday, May 8. Robert's younger sister, Kelsey, will join them.

That’s because Galm is planning a bigger MS walk of his own on campus, scheduled to take off at 10 a.m. on Sunday, May 8, from the College’s Student Life Center. Fittingly, Sunday is Mother’s Day and Galm’s entire family — including his mother — will make the trip to Cortland to join him.

So far, more than 60 people have signed up and donated more than $800 to the National MS Society. That money will support research on an unpredictable, often disabling disease of the central nervous system that disrupts the flow of information within the brain and between the brain and body.

“Whether it’s $5 or $500, anything that we do to increase awareness about the disease is a win,” Galm said.

He’s received several messages from fellow students with personal connections to MS since creating a Facebook event. Some have parents who live with the disease. Another student was diagnosed with it herself.

Galm said his mother’s condition has been manageable but that it’s slowly worsened over time. She becomes more fatigued in the summer months, when she’s susceptible to sickness and Lyme disease. She also started to walk with a cane during the past year.

“You’d never know it,” he said. “She’s the strongest woman I’ve ever met and it’s so inspiring to see. I know how much strength and courage it takes … She’d never let you know.”

Led by his father, Jeffrey, a retired New York State Police trooper, Galm’s family has helped raise more than $200,000 for MS research through two events near his home: an annual walk around Lake Taghkanic and more recently a Skis, Boards and Badges winter obstacle course event led by first responders and other emergency personnel. 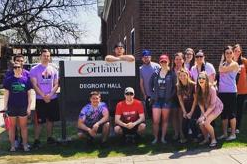 The upcoming walk from SUNY Cortland will take participants approximately 2.5 miles through the city of Cortland, then back to the Student Life Center. Galm, who recently was a finalist for a competitive internship with ESPN and earned the Thomas O. Mwanika Award in Communication Studies at the College’s Honors Convocation, enlisted WSUC-FM to provide music and entertainment at the start and finish area.

The National MS Society also will send a representative to answer questions and collect donations in the Student Life Center lobby from 10 a.m. to noon Thursday, May 5.

“I thought this would be a great way to spend an hour or two before finals week begins,” Galm said. “Get outside, walk a couple miles and support a good cause.”

It should make for a perfect Mother’s Day gift too.