With the win, the Red Dragons improved to 18-0 and earned the automatic NCAA Div. III playoff berth. The Golden Eagles fell to 14-3 and await a possible at-large berth. 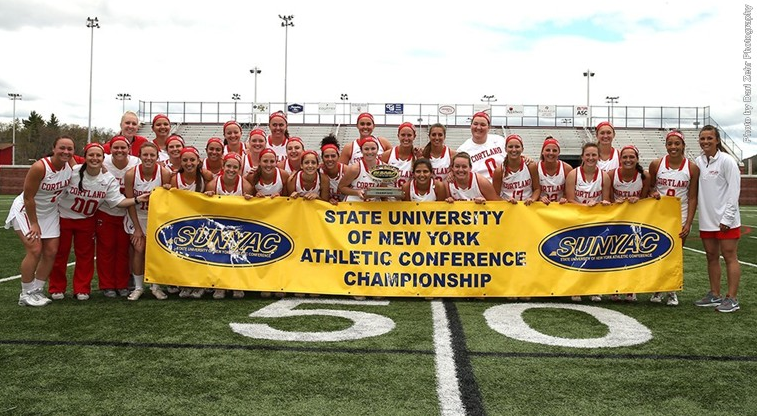 Cortland jumped out to a 6-2 lead with 11:54 remaining in the first half. Gentile scored twice and Monaghan, Elmer, Ohberg and Stone tallied one goal each for the Red Dragons. Dooling and Boddery recorded the two scores for Brockport. The Golden Eagles then outscored Cortland 3-2 in the remainder of the half. Zlinsky, Cullen and Schuber scored the goals for Brockport and Ohberg and Gentile netted one score each for Cortland.

The Golden Eagles scored three of the first four goals of the second half and only trailed 9-8 with 23:09 remaining. Wall scored twice and Boddery added one goal for Brockport and Stone tallied the Red Dragon goal. Cortland followed up with three unanswered goals, two from Stone and one from Ohberg. Schuber and Boddery scored goals for Brockport sandwiched around a Cortland Monaghan goal bringing the Golden Eagles within three with 13:29 remaining. After a scoreless period of 10:56 between the two sides, the Red Dragons closed out the win by outscoring Brockport 3-1 over the final 2:33. Elmer scored twice and Ohberg tallied a goal for Cortland and Wall recorded the score for the Golden Eagles.