Cortland (42-6) will play the winner of Friday’s Trinity (Texas)/Wisconsin-La Crosse game in a winner’s bracket game of Cortland’s four-team pod Saturday at 1:15 p.m. (CT). Emory (34-11) will face the Trinity/UW-La Crosse loser in an elimination game Saturday at 10 a.m.

Lamando, the D3baseball.com National Pitcher of the Year, won a pitching duel with Emory’s Jackson Weeg. Lamando, now 10-0, scattered six singles and walked three for his first shutout of the season. Weeg, who suffered his first loss in eight decisions, also gave up six hits, walked one and struck out seven.

After the teams played three scoreless innings, the game was halted for almost two hours due to a rain. When the game resumed, both Lamando and Weeg continued pitching and both continued to shine.

Cortland got runners on base each of the first three innings, but Weeg induced double play grounders each inning. Weeg allowed only one hit the next three innings, but with two outs in the top of the seventh Dondero hit a pitch over the fence in left for his fourth homer of the season.

Emory left nine runners on base, including at least one in every inning but the third. The Eagles loaded the bases with two outs in the second on a Philip Maldari single, a Chris Young two-out hit-by-pitch and a Chris Slivka walk, but Lamando fanned the next batter. Emory also had runners reach second base in the fourth, seventh and eighth innings, but a strikeout and flyout ended the fourth, and strikeouts closed out the seventh and eighth.

In the bottom of the ninth, Nick Chambers led off with an infield single. Young, however, lined out to first, and Cortland first baseman Austin Clock (Niskayuna) dove to first and got to the bag just before Chambers for a double play. Lamando finished the game with his 10th strikeout to wrap up his first complete game and shutout of the season.

Cortland’s defense supported Lamando throughout with errorless ball. Third baseman Steven Figueroa (Bronx/St. Raymond’s) made a barehanded, off-balance throw on a slow chopper to end the sixth, and Dondero made a diving stop and throw from his knees for the first out in the eighth. 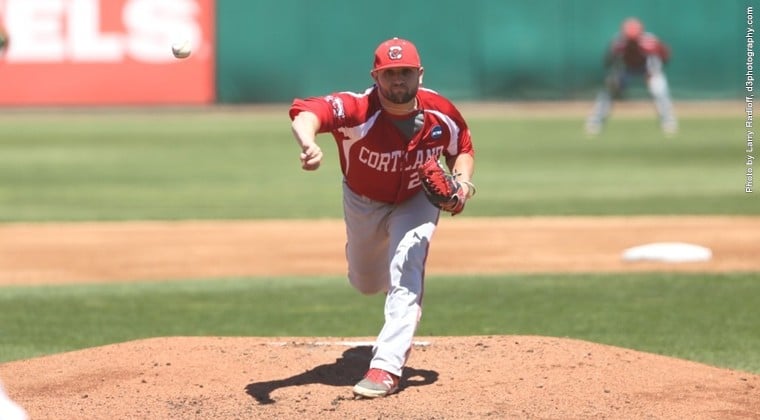