Cortland (43-7), ranked first nationally, will face third-ranked Trinity University of Texas Monday at 1:15 p.m. The Red Dragons lost to the Tigers on Sunday, 9-7, and will need to beat Trinity twice on Monday in order to win the Pool A bracket at the Series and advance to the national championship best-of-three finals. Wisconsin-La Crosse, the national runner-up to Cortland last spring, finishes the season 39-10.

Clock was one of five Cortland players to record multiple hits. Conrad Ziemendorf (Penfield/Webster Schroeder) and Steven Figueroa (Bronx/St. Raymond’s) each finished 3-for-5 with an RBI and two runs scored. Ziemendorf also stole three bases and Figueroa registered a double and a steal. Fabio Ricci (Hawthorne/Westlake) ended 2-for-4 with a walk, RBI, two steals and two runs, and Matt Personius (Binghamton/Chenango Valley) was 2-for-4 with a double. 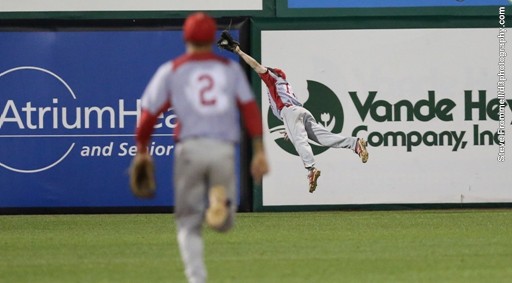 Nick Hart makes a leaping catch to rob Taylor Kohlwey of an extra-base hit in the bottom of the third (Photos by Steve Frommell/D3photography.com)

Cooke, now 8-1, allowed nine hits and one walk and struck out four. He gave up six hits over the first four innings, but held the Eagles hitless over the fifth, sixth and seventh innings before being touched for a homer and two singles before being pulled in the eighth. Turner Parry (Syracuse/West Genesee) entered with two outs and two on in the eighth. He walked a batter to load the bases, but got a soft lineout to end the threat and gave up one hit in a scoreless ninth for his sixth save of the season.

Ben Morgan went 3-for-4 with an RBI for UW-La Crosse, while Justin Anderson and Carter Hoffman each finished 2-for-4. Anderson hit a solo homer and scored twice. Senior Taylor Kohlwey, the Division III National Player of the Year, entered the game with a 51-game hitting streak, the second-longest in Division III history, but finished 0-for-5.

Kohlwey was robbed twice on diving catches by Cortland outfielders. His liner in the third was going over the head of the left fielder Nick Hart (Fredonia), but Hart extended on a dive toward the warning track to make the catch. Right fielder Ricci made a diving catch in the right center gap on a liner in the fifth. Kohlwey got a final chance to extend the streak with two outs in the ninth but grounded out to second to end the game.

Jameson Lavery started for the Eagles and fell to 8-2 with the loss. He allowed seven hits and four runs in four and a third innings with two walks and two strikeouts. Brock Rude was touched for three runs on three hits and three walks in an inning and two thirds, and Logan Mallek gave up one run on three hits with three strikeouts over the final three frames.

La Crosse took a 1-0 lead in the second on three straight hits – an Anderson double, a Hoffman bunt single, and a Morgan RBI single. Cortland gained a 2-1 lead in the fourth on a Ricci single, a Figueroa RBI double and a Clock RBI single, but couldn’t score more despite eventually having runners on second and third with no outs.

The Eagles knotted the game in the bottom of the fourth when Morgan singled with one out, stole second on a strikeout, and scored on an Alex Brown RBI single. Cortland responded with two runs in the top of the fifth to take the lead for good. Ziemendorf bunted for a single with one out and Ricci walked. With two outs, Ziemendorf and Ricci pulled off a double steal, and Clock followed with a flare that fell in down the left field line for a two-run single and a 4-2 lead.

The Red Dragons tallied three runs in the sixth to push their lead to 7-2. With two outs and runners on second and third, Ziemendorf hit a short chopper that eluded the pitcher for an infield RBI single. Ricci singled through the right side to drive home a run, and Ricci and ZIemendorf executed their second double steal of the game – this time a “first and third” play where Ricci got caught in a rundown and Ziemendorf eventually broke for home and just eluded the tag at the plate.

Anderson’s homer cut Cortland’s lead to 7-3 in the eighth, but Cortland picked up the game’s final run in the top of the ninth when Figueroa led off with a single, stole second and scored on a Clock RBI single.