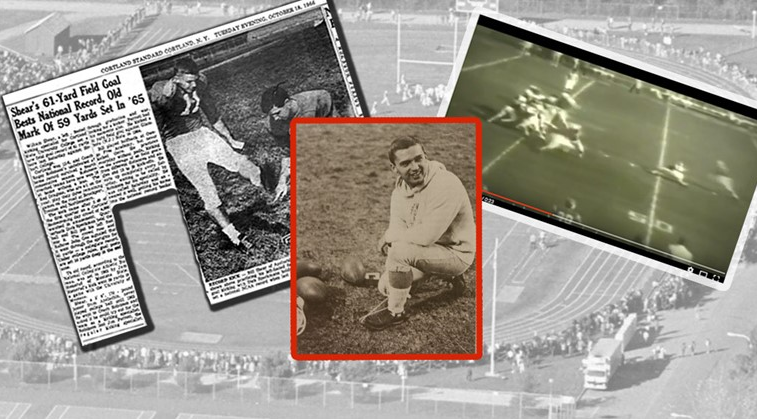 Former SUNY Cortland football kicker Bill Shear '67 will be a guest of honor at the Red Dragons' Saturday, Oct. 8 home game against Buffalo State as the program recognizes the 50th anniversary of Shear's historic 61-yard field goal on Oct. 15, 1966.

The kick was the first field goal of at least 60 yards made in either an NCAA or NFL game. It broke the previous record of 59 yards set by future NFL Hall of Famer Jan Stenerud of Montana State the previous season, and set a college football benchmark that stood until 1973.

"This was a truly phenomenal accomplishment," said SUNY Cortland President Erik J. Bitterbaum. "Bill's kick has only been matched by a few dozen college players over the last half century, and is part of our proud Red Dragon heritage."

A native of Apalachin, N.Y. (near Binghamton), Shear is expected to be a team honorary captain for the opening coin toss this weekend, and he will be recognized during a halftime ceremony.

His famous kick occurred on what was previously known as College Field, and later Davis Field, and is now the site of SUNY Cortland's Student Life Center. Shear's kick gave Cortland a 3-0 first-quarter lead in an eventual 15-8 win over Hobart College.

Video of the kick is posted on Cortland's Athletics YouTube page. It was recently located thanks to two organizations. The web site FootballVideos.com converted a number of old Cortland footbal game films to VHS for sale to alumni in the late 1990s, and the company electronically converted the clip of Shear's field goal this past summer. That clip was then combined with footage from Hobart that showed a game official running over to retrieve the ball after Shear's kick.

The combined 23-second video clip, which starts with a third-down incomplete pass prior to the kick, will be sent to media outlets on request.

The left-footed kicking Shear was the first Cortland student to be drafted in the NFL. He was selected in the 10th round of the 1967 draft by the Green Bay Packers under legendary head coach Vince Lombardi. He participated in the Packers' preseason camp and also had tryouts with the New York Giants and the then-American Football League Cincinnati Bengals before going on to start his own construction business in the Southern Tier.

Shear never kicked until his junior year at Cortland. He played junior varsity baseball as a freshman and competed on the golf team as a sophomore. According to an interview Shear did with Columns, Cortland's alumni newspaper, in 1991, he first got the idea of being a kicker after showing off his leg strength in a soccer class taught by Larry Martin '53, who was also an assistant football coach. "I'll never forget that," Shear said. "It was something he planted in my mind. I don't think he thought it was going to lead to anything, but it was something that certainly helped me make my decision."

Shear eventually was invited to the Cortland preseason football camp in his junior year, and he recalled what his preparation was like as the camp date approached. "I never kicked before so all summer I kicked," Shear noted. "I said I've got to learn how to do this. So I went down in my back yard. My mother would hold the ball for me, my sister would hold, my brother would hold."

Things did not get off to a good start at the camp, as Shear recalled making only one of his 15 extra-point attempts during the opening day while kicking with the second team.

"I don't know why I stayed. I was terrible," he said. "I never had a line rush me before. Then, the next day, (head coach Roger) Robinson said 'Shear, go over with the first team.' I had no idea what I was doing or why I was good or bad, but I went 15-for-15. The kicks just weren't going through, they were going through perfect."

Shear's best field goal as a junior was 39 yards. It was five games into his senior season in 1966 when Cortland hosted Hobart.

After a Richard Speckmann '67 third-down pass fell incomplete, Shear ran out to attempt a kick from Cortland's 49-yard line, with Speckmann as the holder. College rules at the time allowed missed field goals to be treated as punts and be returned, and the coaching staff figured that Shear's 61-yard attempt would likely end up being similar to a punt.

"So (My roommate and teammate Bob) Byers '67 grabs me and shoves me next to Robinson as the pass goes incomplete," Shear recalled. "He tells me to make it like a punt. Get it into the end zone if nothing else. All he was thinking was don't let them run it back. When I got into the huddle before the hike, I said 'Let's not get it blocked in the middle of the field. Robinson will kill me.'"

The kicked wasn't blocked, but instead easily covered the distance, and then some. The ball landed about 10 yards beyond the goal post, and even shocked official John Gee, who raced back to the goal line late after realizing that the kick had a chance to be good.

News reports from that day note a strong wind at Shear's back during the kick, something Shear confirmed in his 1991 interview. Shear, however, made a 51-yard field goal into the wind a couple of weeks later in a victory at Trenton State. 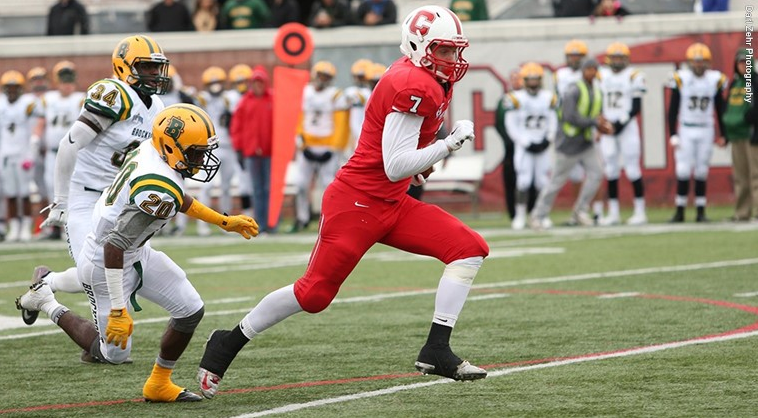