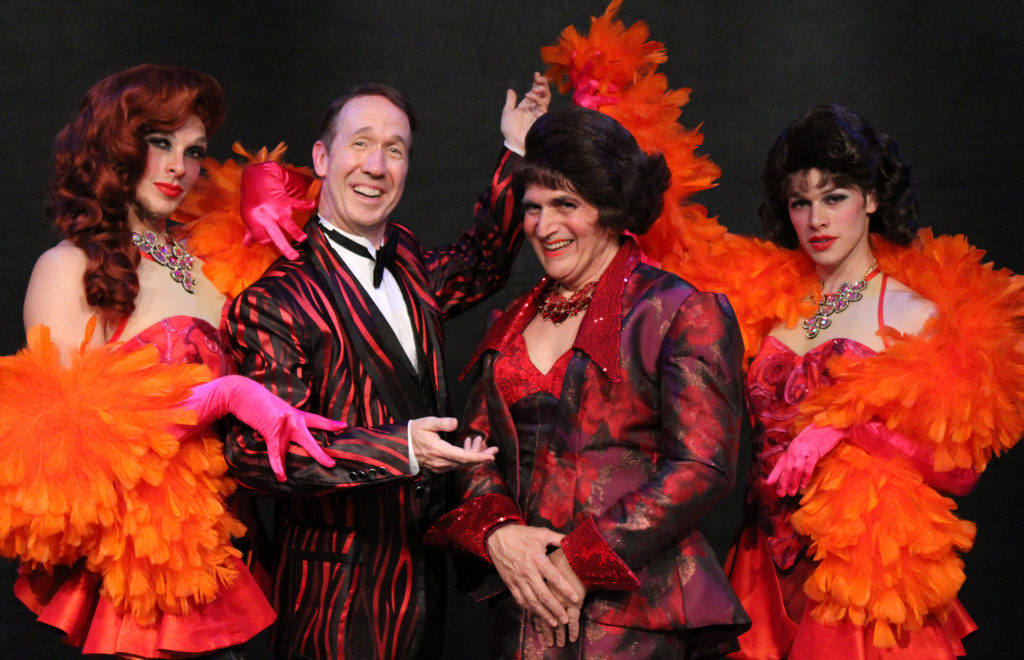 For the second production in their 46th annual season of professional summer theatre, Cortland Repertory Theatre presents the fabulous and flamboyant musical La Cage Aux Folles, which boasts a book by Harvey Fierstein based on the play by Jean Poiret, and music and lyrics by Jerry Herman. As a playwright, Fierstein is well-known for the musical Newsies and the current Broadway production of Kinky Boots; Herman is best known as the composer of Hello Dolly and Mame. While La Cage Aux Folles is a multiple Tony-Award winning musical and one of Broadway’s all time greatest hits, the story is perhaps best known as the movie The Birdcage, which starred Robin Williams and Nathan Lane.

Performances of this hilarious and heartwarming show will run from June 21 – July 8 with evening show times at 7:30.  Matinees are available on June 23, 25, 28, 30, July 2 and 5 at 2:00 PM.  Tickets may be purchase by calling 800-427-6160 or by visiting the CRT Box Office at 24 Port Watson Street in downtown Cortland. Tickets are also available for sale 24 hours a day through the CRT website at www.cortlandrep.org.

“Family” takes center stage in this story, as after twenty years of un-wedded bliss, Georges and Albin, two men partnered for better-or-worse, are about to get a bit of both! Georges' son, Jean-Michel, announces his impending marriage to Anne, the daughter of a closed-minded local politician. Further complicating the situation is the family business: Albin and Georges run a drag nightclub where Albin is the star performer “Zaza”! When the families meet for the first time at a “normal” dinner, the feathers and sequins start to fly! With stunning costumes, catchy songs and hilarious performances, this is a wonderfully uplifting family show…for every kind of family.

La Cage Aux Folles is directed by Bert Bernardi, who has been with CRT for many seasons most recently directing The Fox on the Fairway last summer.  His other CRT directorial credits include The Addams Family, All Shook Up and The Full Monty among many others. Choreography is handled by Matt Couvillon, who choreographed CRT’s production of A Chorus Line last summer and appeared in CRT’s Cats, Brigadoon and The Pajama Game.  The show is musically directed by Joel Gelpe, an Ithaca College music director whose work at CRT has been heard in A Chorus Line, 1776, Les Miserables and many others. 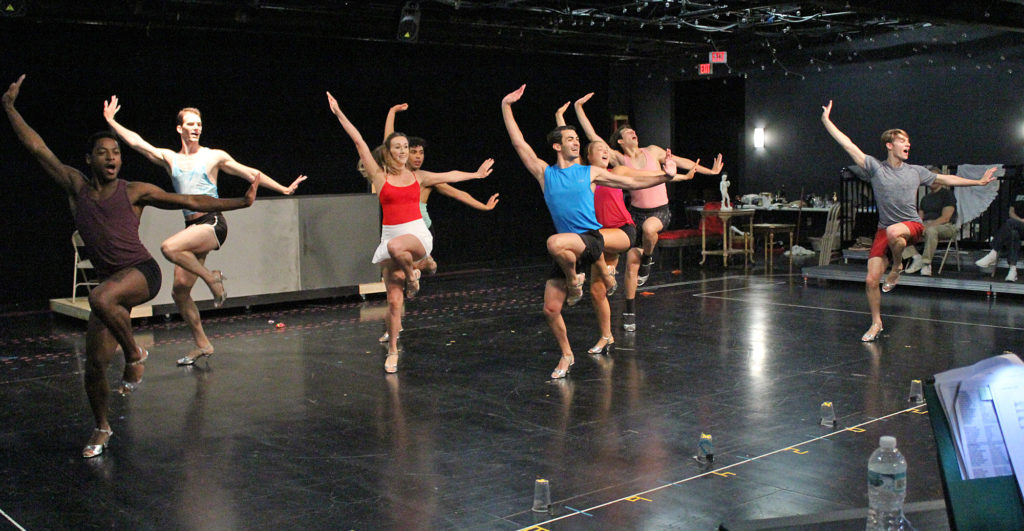 A rehearsal photo of the opening number “We Are What We Are” performed by The Chagelles in Cortland Repertory Theatre’s production of the flamboyant musical “La Cage Aux Folles” running from June 21 – July 8 (Eric Behnke).

Making his CRT debut as Albin/Zaza is Joel Briel, who is a 10-year veteran of the Broadway cast of CATS, and also appeared in the Broadway revival of Fiddler on the Roof.  Playing Georges is returning Equity Guest Artist actor Brian Runbeck, who appeared in CRT’s How The Other Half Loves,Harvey and portrayed Oscar Wilde in Gross Indecency: The Three Trials of Oscar Wilde, for which he won the SALT Award for Best Actor. As nightclub owner Jacqueline is Jeremy Parker, returning to CRT after appearing in The Addams Family and Always…Patsy Cline at CRT Downtown.  As Jacob, the butler who prefers to be called the maid, is Anthony Wright, last seen in CRT’s A Chorus Line and West Side Story.  Two of CRT’s performing interns play principal roles: Aaron Jacobs as the couple’s son Jean-Michel and Syracuse University student Claire Sorlie as his fiancée Anne.  As Ann’s parents, the Renauds, are Chris Nickerson, seen in CRT Downtown’s The Queen of Bingo and The Birds, and Rebecca McGraw from many CRT productions including The Kitchen Witches, The Addams Family, and Les Miserables. Syracuse resident and actor Maxwel Anderson makes his CRT debut as Francis, the nightclub’s stage manager.

Keep your eye on the Notorious Chagelles as you try to guess just who is who and what is what!  These high-heeled, feathered dancers are performed by talented CRT interns Michael Dikegoros as Mercedes, Caiti Marlowe as Monique, Grant Paylor as Chantel and McKena Silva as Nicole. They join former CRT performers Giovanni Da Silva as Angelique and Logan Mortier as Bitell, both appeared in A Chorus Line and West Side Story last summer.  Making their CRT debuts are Brendan Henderson as Phaedra and Richard F. Nebel, II as Hanna.

Stage Manager Ben Shipley makes his CRT debut with this show, leading the design and production team. Darin Himmerich debuts as Scenic Designer and costumes are created by long-time CRT Costume Designer Jimmy Johansmeyer. Continuing their work this season are Props Designer Terry Baker, Sound Designer Seth Asa Sengel and Technical Director Dana White Jr. Lighting Designer David Sexton returns for his third year at CRT, having worked on West Side Story, A Chorus Line, and The Addams Family for which he won the SALT Award for Best Lighting Design.

CRT continues “Friday Night Talk Backs” at which a Q & A session with the actors, designers and crew takes place after select Friday evening performances. Tickets are also on sale for all of CRT’s summer season, which includes Footloose, Appointment With Death, Nana’s Naughty Knickers, Life Could Be a Dream and July performances of the children’s show The Velveteen Rabbit.  Please visit www.cortlandrep.org for details and show times. 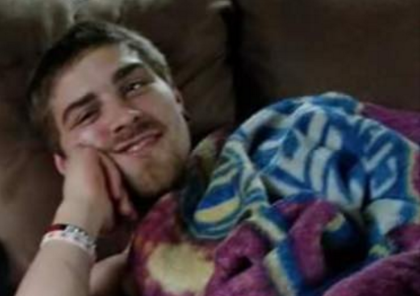 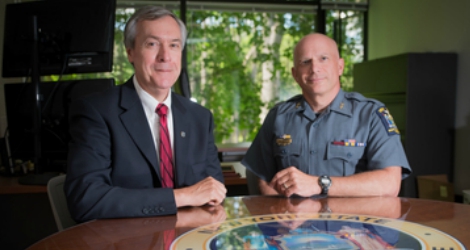