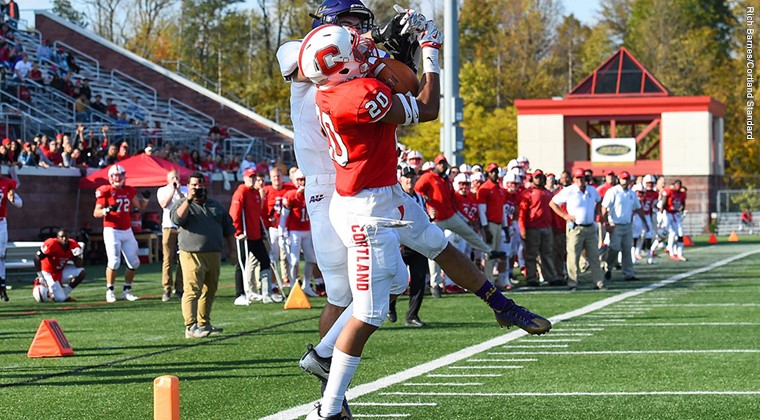 Dezmund Hunter intercepts a pass in the end zone to give Cortland the overtime win against Alfred University on Sat., Nov. 14 (Darl Zehr Photography)

Cortland looks to extend its winning streak to three games and remain near the top of the Empire 8 standings as it travels to Morrisville State.

The Red Dragons improved to 3-1 in league play with a 20-17 overtime win over nationally ranked Alfred last Saturday.

Morrisville is 2-4 overall (0-3 in the conference) after falling at Empire 8 leader Brockport.

Cortland leads the series versus Morrisville, 10-2. The Red Dragons won the first nine meetings before two straight wins by the Mustangs, but Cortland regained the upper hand with a win at home last fall.

The series actually began in 1930, with Cortland winning, 12-0, and the teams did not meet again until the Red Dragons won 52-14 at Morrisville in 2006. Cortland and Morrisville both joined the Empire 8 in 2015 after meeting as members of the New Jersey Athletic Conference from 2008-14.

Last year, Brett Segala completed 28-of-39 passes for 322 yards and four touchdowns in his first collegiate start as Cortland defeated Morrisville, 45-20. Jon Mannix caught 10 passes for 100 yards and two scores and Jake Smith finished with seven receptions for 71 yards and a TD. Zach Tripodi carried eight times for 89 yards and a score and Johnnie Akins caught a TD pass, while Shane Cronin made a 35-yard field goal and all six of his PAT kicks. Mark DeLuise and Max Jean led the defense with 14 and 12 tackles, respectively, and Brandon Lewis returned an interception 39 yards for a TD.

Morrisville took an early lead on Cory Benedetto's 24-yard TD pass to Darrell West before Cortland rattled off 31 straight points. West scored on a 1-yar TD run in the third quarter and Nick Edmond finished the scoring with a 14-yard TD run in the fourth. Joseph Faniel caught seven passes for 82 yards and Lucas Graves paced the Mustangs' defense with nine tackles.

Notable games in the series include the 2007 game at Cortland – the Red Dragons' first-ever home night game – that didn't end until 12:46 a.m. due to two lightning delays, with Cortland winning 71-7, and the Red Dragons' 51-37 win at Morrisville in 2008 in which Andrew Giuliano ran for a school-record 281 yards, including four TDs.