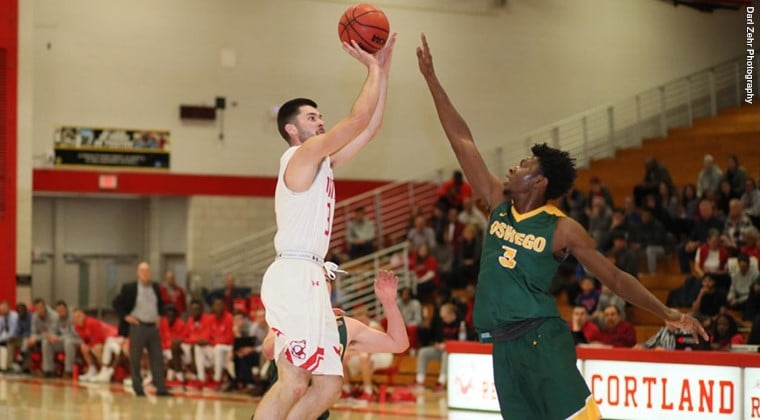 Justin Cooper takes a jumper during the first half of Cortland's win vs. Oswego. Cooper recorded a double-double with 17 points and 11 rebounds (Darl Zehr Photography).

Morales made 8-of-13 shots from the floor and also totaled six rebounds and three assists for the Red Dragons (4-1, 1-0 SUNYAC). He scored 14 of his 21 points in the second half. Cooper tallied 11 of his 17 points after halftime. He was 9-of-10 from the foul line and led the Red Dragons with four assists.

Ian Schupp led Oswego (1-4, 0-1 SUNYAC) with a game-high 23 points. He buried seven of his 11 attempts from the 3-point arc. Jamir Ferebee made three 3-pointers and closed the game with 17 points, eight rebounds and three assists, and Tyler Pierre scored 14 points on 6-of-8 shooting and led the Lakers with nine rebounds.

Cortland never trailed in the contest, but its lead was in single digits until the last seven minutes. The Red Dragons led 39-32 at halftime, but Oswego opened the second half on an 11-4 run and tied the game at 43-43 on a Schupp trey with 16:15 left.

A Lydon layup, two Cooper free throws and a Joseph 3-pointer put Cortland up 50-43 with 14:09 remaining, but Oswego got back to within three points less than a minute later on a Schupp 3-pointer and a Ferebee free throw.

After about a three-minute scoring drought for both teams, Cortland took a 53-47 lead with 10:32 remaining on Jake DiSanto's (Rochester/Victor) 3-pointer. Liam Sanborn answered for the Lakers with a layup 19 seconds later, but Morales scored five points, sandwiched around a Pierre layup, and Cortland led 58-51 with 9:14 remaining.

Leading by five with eight minutes left, Cortland used a Nicky Bonura (Mount Kisco/Fox Lane) 3-pointer and a Joseph dunk to take a 63-53 lead. Oswego made another push back to within five on two Ferebee free throws at the 5:15 mark, but Cooper's layup and a traditional 3-point play by Morales gave Cortland a 68-58 advantage with 4:15 on the clock. Cortland led by at least eight from that point forward until a final 3-pointer by Schupp with three seconds left created the final margin. 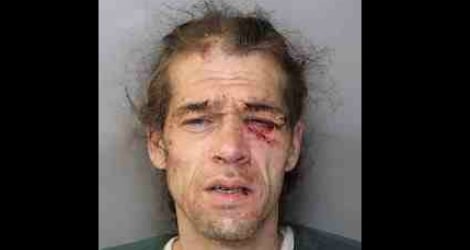