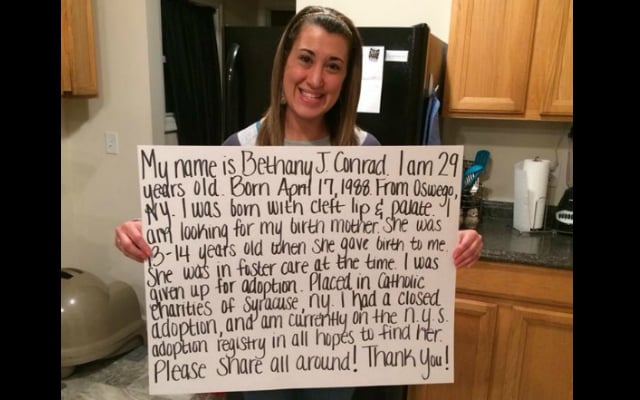 Update: Bethany Conrad's biological mother has reached out to her. Read the full story here.

CORTLAND, N.Y. - A Cortland woman's Facebook post asking for help in her search for her biological mother has quickly gone viral. On Friday night, 29-year-old Bethany Conrad posted a photo of herself on Facebook holding up a sign that detailed her story. Within hours, thousands of people began sharing the post, some as far away as Australia and the Dominican Republic. In less than 48 hours, the post has been shared more than 11,000 times on Facebook.

"I don't have that many friends on the Internet. I'm not an open person," she said. "Having over 10,000 people who have shared it, I'm so blessed." She has received messages from others who have been in her situation. Some people have recommended trying DNA testing services such as 23andMe, which has helped others locate their biological parents.

Bethany J. Conrad was born in Oswego, N.Y., on April 17, 1988. Her mother was in foster care and between 13 and 14 years old when she gave birth to Conrad. Given her age and living situation, Conrad's mother was forced to put her daughter up for adoption through Catholic Charities of Onondaga County. After spending a short time in foster care, she was adopted by Wendy Conrad, a single mother who, as it happens, was also adopted. "She was adopted along with her sister. My grandfather and grandmother fostered children. It's definitely a thing in my family," Conrad said. She and her mom spent the first six years of her life in Liverpool, N.Y., before moving to Cortland, where she spent the remainder of her childhood. She attended Cortland Christian Academy and entered the workforce upon graduating.

About five years ago, Conrad put her name on the New York State Adoption Registry in the hopes that her birthmother might be looking for her. She was assigned a registry ID number and will be contacted if more information comes to light. Because it was closed adoption, Conrad only has access to basic, non-identifying information about her birthmother. Her mother is of German-Italian ancestry and has three older brothers. She liked to play volleyball and soccer; she suffered from various allergies; she had kidney and thyroid problems. "Before I even had any of that paperwork, I played soccer and volleyball throughout high school," Conrad said. "I also have horrible allergies and my own health issues."

Conrad currently works as a manager for a local retail store, though she is planning to move to South Carolina with her fiancee next month. Still, she remains hopeful that she will be reconnected with her biological mother, who would be turning 42 years old this year. Conrad says she holds no ill will toward her mother for giving her up for adoption and would welcome the chance to meet her. "I hope she wouldn't think I was angry at her or upset about anything that has happened," Conrad said. "I want her to know about me. There's no hard feelings. I just want to meet her." 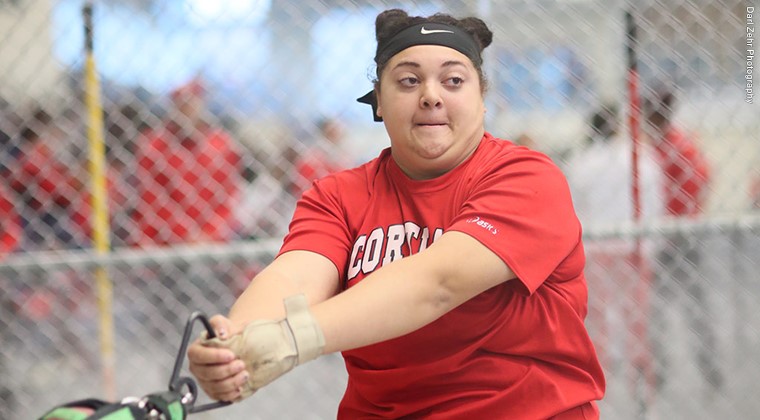