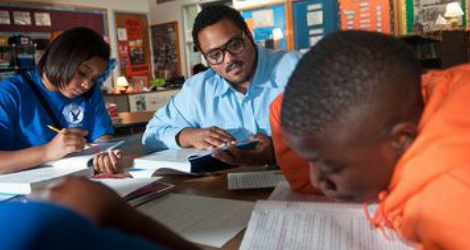 SUNY Cortland will take a new approach toward helping first-year students who struggle with writing, thanks to a $20,000 State University of New York grant.

Starting in the fall, the College will be part of the SUNY Developmental English Learning Community, joining 14 other public institutions from across the state. The effort follows a model developed at the Community College of Baltimore County (CCBC) that more than doubled the percentage of students who passed the school’s basic first-year writing course.

“What happens with standalone structure is you lose a lot of students in that gap between courses,” said Laura Davies, associate professor of English and director of SUNY Cortland’s Writing Programs. “We’re trying to close the gap where students drop off, so they avoid a semester’s worth of activity where they don’t earn credit.”

The potential benefits are numerous. Rather than taking an entirely remedial course, developmental writers are exposed to a higher quality of work from their classmates, which in turn may improve their own self-image. Developmental writers also receive more individualized instruction and build familiarity with their course instructor.

Davies said SUNY Cortland will look to offer four sections of CPN 100 that incorporate the new approach in the fall, benefitting up to 40 first-year students. Funds from the grant will be used to support faculty development and training for instructors who teach first-year composition courses at the College.

“This grant offers an opportunity to help new students and our first-year writing instructors at the same time,” said Davies, who co-authored the College’s proposal with Matthew Lessig, professor and chair of the English Department, and Abby Thomas, director of Advisement and Transition. “Really, it’s all about retention.”

At CCBC, semester pass rates in English 101 more than doubled — from 27 percent to 64 percent — after the ALP model was introduced in 2007. Onondaga Community College in Syracuse, N.Y., also saw a major increase in student performance after adopting the program. In 2014-15, only 26 percent of students in the standalone developmental writing course earned a C or better in first-year composition compared to 58 percent of ALP students.

An important next step for the College will be to identify students who could benefit from the ALP model. Davies said self-placement from students and their families would be the ultimate goal, rather than using grade point average or test scores.

“The last thing we want is for this to seem like a punishment or a bad thing,” she said. “It’s really going to help those students who need help with writing be even more successful in their first semester and beyond.”