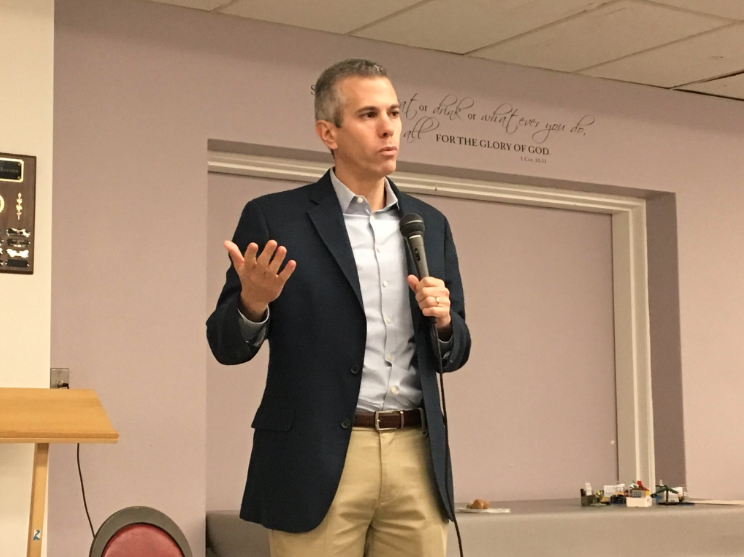 The event was organized by Indivisible Cortland County, a local group formed after the 2016 election in response to the policies pushed by President Donald trump and congressional Republicans.

Dr. Doug Rahner, medical director at Family Health Network, started off the meeting by giving a quick rundown of the current national debate over how healthcare should be distributed. Rahner made a point to say the Affordable Care Act was "not dead," despite previous claims made by President Trump.

"The key thing to see is that even with the passage of the Tax Bill, people are still signing up and seeing the value of health insurance,” Brindisi said.

He also shared that the Children’s Insurance Program is now being funded, and the Community Health Centers Qualified Health Centers—which had its funding dropped in September and has since been in limbo—was just approved for two years on Thursday night.

“Don’t expect big changes immediately,” he said, “but you’ll likely see changes within the next year or two.”

State assemblyman Anthony Brindisi, who represents New York's 119th Assembly District, was then introduced to an audience of more than 100 people. Currently residing in Utica, Brindisi has been in office for 6 years and, last year, decided he would run for Congress against Republican Claudia Tenney in the U.S. 22nd congressional district, which includes Cortland County.

“I decided to run for Congress because I’m very concerned with the way our country is headed,” Brindisi said. “I think people in Washington are losing sight that their purpose is to represent the people in their districts.”

Brindisi expressed that he believes the most important part of the job is getting things done for the districts you represent. He stated that it’s important as a representative to not be there just when campaigning; it’s important to be there when you’re elected.

“I know how to show up, I know how to listen, and I know where to find the answers when it’s time to solve problems” he said.

Experts believe the race between Brindisi and Tenney will be one of the most competitive races in the nation in 2018.

Correction: A previous version of this article incorrectly stated that Tenney represents the 23rd congressional district.