A city man was arrested today for lying to police after an investigation revealed he falsely accused coworkers of selling drugs and child abuse, according to the Cortland Police Department.

The man’s reports exacerbated the workload at the County’s Child Protective Services office, which a state analysis shows topped at 868 in 2019 ‒ an above-average number of reports compared to similar counties.

If the investigators had not determined the claims were false, the accused coworkers could have been arrested and lost custody of their children, noted Strangeway.

George fabricated accusations against two different coworkers in two separate incidents, according to the department.

On Dec. 28, George reported to police that a 53-year-old man he worked with in a city restaurant was selling drugs and having sexual intercourse with his daughter, Strangeway said. This complaint resulted in a thorough investigation that determined the accusations were lies, he said.

As the investigation continued, the detective learned another of George’s coworkers — a 53-year-old woman — had been accused in November 2019 in an anonymous complaint to CPS of selling drugs, abusing her children and keeping a filthy home, according to the department. When police investigated the earlier complaint in 2019, they too discovered the report was false, said Strangeway. But during the investigation, CPS visited the falsely accused woman’s home during a birthday party for one of her children, he said. Further police work revealed the anonymous report was made from a phone number registered to George, said Strangeway.

In both cases, investigators conducted forensic interviews with the children named in the complaints, said Strangeway.

The false accusations were both made after George argued with his coworkers, he said.

George is no longer employed at the restaurant, said Strangeway.

Strangeway was sympathetic to the adults and children whose lives were disrupted by the accusations.

“I’m sure it’s very disruptive to have CPS conduct an investigation into your family when there is no truth to the investigation,” he said. The false accusations also squandered the time and resources of the busy police and CPS departments, added Strangeway.

“We don’t want to discourage people from reporting alleged crimes against children,” said Strangeway. “At the same time, it’s a waste of time.”

Cortland County Child Protective Services received 868 reports in 2019, a number equivalent to 9.6 percent of all County children, according to state statistics. Investigators found indications of child neglect or abuse in only 215 reports in 2019 — 28 percent of cases closed that year — while 545 reports were determined to be unfounded, according to the state’s 2019 Monitoring and Analysis Profiles. The County’s CPS had not reached a determination in 108 cases reported in 2019 at the time of the analysis. 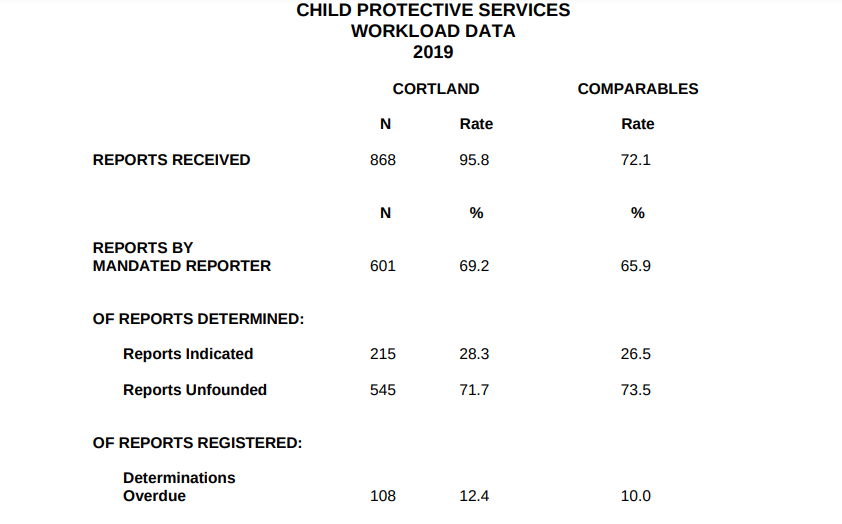 Cortland County is slightly above average for comparable NY counties in its number of cases where child neglect or abuse was indicated, according to the analysis. Cortland County investigators discovered these indications in 28.3 percent of cases, 1.8 percent higher than the average case percentage in comparable counties. 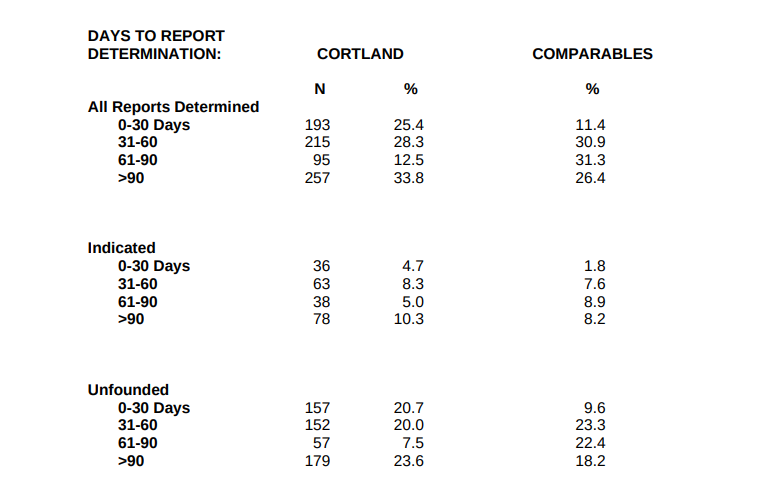 An administrator from the County’s Child Protective Services could not be reached late Tuesday afternoon.

While false reports of child abuse or neglect are harmful, honest reports by well-meaning citizens are critical to keeping children safe. If someone notices indications of abuse, they can contact the state Child Protective Services at 1-800-342-3720 or city police at 753-3001. Some of the indications of child abuse and neglect, according to the state Office of Child and Family Services, are:

Indicators of physical abuse can include the following:

Indicators of sexual abuse can include the following:

Indicators of maltreatment can include the following: 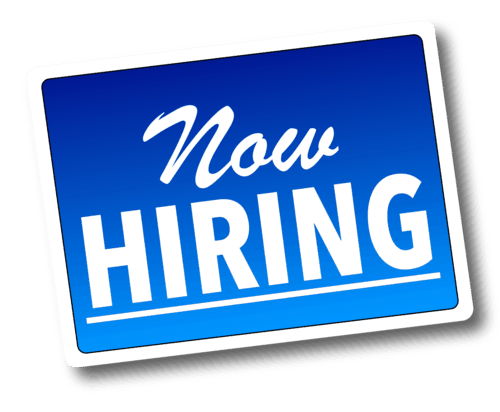 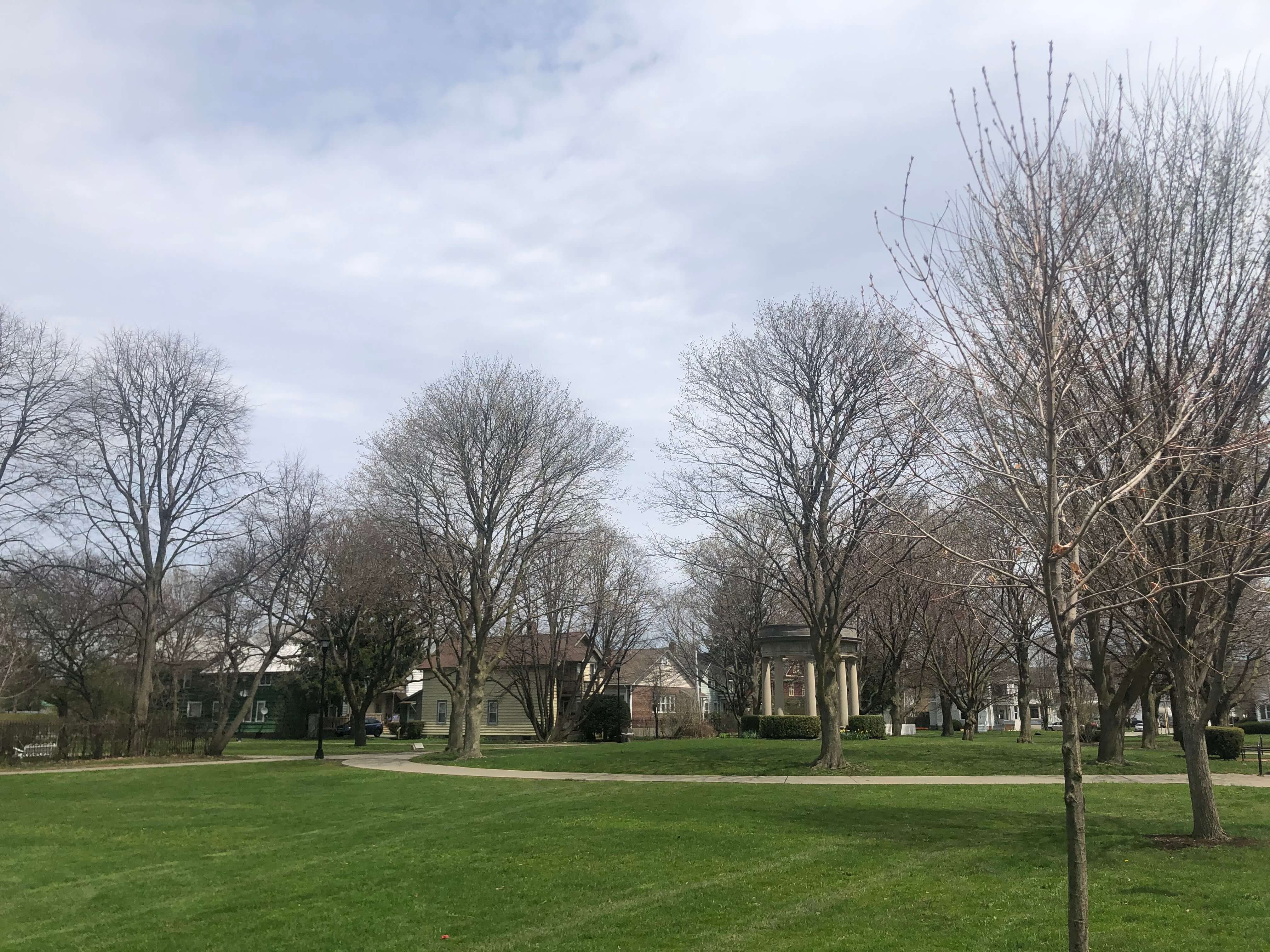