When the precursors of modern humans roaming the world’s grassy savannahs 2.6 million years ago had a medical emergency, there were no vans full of emergency medical technicians speeding to the rescue.

Survival expert Cat Bigney and archaeologist Bill Schindler certainly had it rough living as primitive people before humans mastered fire and agriculture. But, if they fell 40 feet from a tree, got bit by a snake, starved or ate the wrong thing while filming a segment, the program’s medic/safety director Todd Curtis ’11 was ready, equipped and trained to help them.

Curtis, a backcountry medical specialist who is the husband of SUNY Cortland Associate Professor of Health Jena Nicols Curtis, traveled with the cast and crew from mid-June through late November to Ethiopia, Turkey, Mongolia, Alaska and Oregon to keep them all safe as they filmed the new show re-creating the story of human evolution and migration from Africa to the U.S.

Curtis was on hand as Bigney and Schindler trekked for month-long stints at a time as Homo erectus did before the advent of making a fire — for example climbing up into thousand year old Baobab trees in order to survive nights on the Serengeti and helping themselves to meat from a recent lion kill before the predators returned to make a meal of the intrepid survivalists. 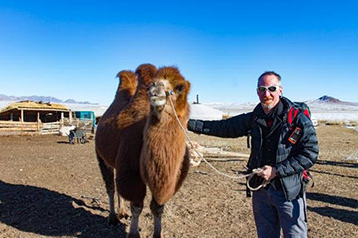 Todd Curtis '11 makes a friend while serving as the medic/safety director on location in Mongolia for the National Geographic Channel series "The Great Human Race." 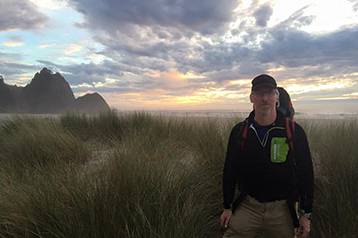 The group filmed at two different geographic locations then went home for two weeks between assignments.

“I set the crew up for all the rope work, all the water work,” said Curtis, a former biology major at SUNY Cortland. He also is a graduate of SUNY Upstate Medical University at Syracuse’s paramedic program with additional training and certification in critical care and remote and wilderness medicine through University of Maryland at Baltimore County.

“If the crew needs to put a camera 50 feet up in a tree, or down a cliff-face, part of what I do is set up the ropes to safely raise or lower them to those locations,” he said. “And if anyone goes into water or gets into trouble, I’m there to pull them out.

Since graduation, Curtis has carved out a career helping out with extreme sports competitions, reality television segments and traveling to instruct groups on backcountry safety through Remote Medicine International.

Curtis presently is teaching a backcountry medicine class in the Cascades for six weeks through early March. Later this spring, he’ll do the same in Alaska. After that, who knows?

A year prior to “The Great Human Race,” Curtis was on location to ensure safety during filming of the National Geographic Channel series “The Raft,” described as a social experiment in pushing people to the extreme by setting two strangers afloat to survive seven days at sea to the elements, hunger, thirst and even sharks.

When filming wrapped in Puerto Rico his wife Jena, whom Todd met at 16 in Cooperstown, N.Y., eagerly joined Todd on the 48-foot catamaran he had used to follow cast and crew and needed to return to the Caribbean/British Virgin Isles.

Last June, a National Geographic executive called Todd on a Tuesday, disappointed with the medics the program had hired in Africa. By Wednesday of the next week Curtis was on a plane bound for Ethiopia.

A bit nomadic personally, Curtis as a teen had participated in Outward Bound programs to the Cascade Mountains out west. He still loves rock climbing, kayaking, winter mountaineering and other rigorous outdoor activities.

Curtis said that for the National Geographic Channel programs he worked diligently to ensure that everyone avoided coming to any actual harm.

“When we go out and scout day to day, we look things over in case people should get sick, how to deal with that,” Curtis said.

He arrived in each location with eight airport-checked bags filled with medicine, rope, harnesses, dry suits, personal flotation devices and some clothing to help his cast and crew deal with weather extremes.

“This was probably one of the best teams you could put together of people who do ‘adventure filming’ globally, in very rugged environments, where very simple things like keeping your equipment dry or filming people at very high altitude can be critical, ” he said. “The team has become very good at dealing with those challenges. But they need someone to care for them if things go wrong, which does happen for various reasons.

“There were a lot of medical problems,” he said. “You’re eating foods that are not particularly good or are not what we are used to. What’s ordinary food to a local Ethiopian is not to an American.”

The crew of each show segment also included an ever-changing assembly of local residents in each country who handled things like transportation, gear, camera assistance and “fixers” tasked with making problems go away.

“Car accidents are probably one of the riskier things we could experience,” Curtis said. “We’re driven by locals, and if we get in an accident, that’s a six-hour drive back to capital to then fly the patient out. In Mongolia, there are very few good roads. Outside the capital and the one other major city, a highway is literally two indentations in the ground.”

Other hazards arose as the two survivalists carried out the show’s premise that Homo sapiens started in central Africa with an evolving set of tools over a journey lasting thousands of years.

“Depending on where we were, the cast lived as humans did at that point of time in our development,” Curtis said. “They built shelter and only used the tools available to humans at that time. They dressed in clothes made of animal skins they personally made and sewed. They often were killing and eating things on the fly. And if not catching and killing things they were not eating, which also was a challenge. In Alaska, there was torrential rain and snow up on the mountains, and glaciers. In Mongolia, which is basically in Siberia, at night it would get down 20 below zero.”

During filming Curtis used his satellite phone to consult about dispensing emergency medicine with Jeremy Joslin, a physician who directs the adult emergency room at SUNY Upstate as well as its wilderness and expeditionary medicine fellowship.

Several years ago the doctor asked Curtis — who earned SUNY Cortland’s Outstanding Student Leader Award in 2009 — to volunteer on a medical team for a multi-day jungle marathon in the Amazon rainforests. Curtis’ growing involvement in backcountry medicine as well as his connection with Remote Medicine International led to the opportunities with National Geographic Channel.

Emergency medicine represented a 180-degree career shift for the non-traditional student, who was a senior project manager for Hewlett Packard when he and Jena returned to upstate New York after living in the Washington, D.C. area and New York City for many years.

He’d obtained his EMT certification in 1987 — his high school graduation year — started and abandoned a degree in international education at American University, and spent six years as a patient care technician at Bassett Hospital in Cooperstown. On Sept. 11, 2001, he was working as a network engineer in a data center for American Airlines in Manhattan and Newark Airport. He offered his information technology skills to the American Red Cross to help them track survivors of the World Trade Centers disaster to various emergency shelters so their families knew they were safe.

“I had 11 years at Hewlett Packard and I was approaching 40 when decided I wanted to do something different,” Curtis said. “I loved being in the out-of-doors. I loved doing medicine. I loved teaching. I wanted to figure out how to make some sort of career out of those possibilities.”

Originally his biology degree was a step along his way to becoming a doctor. But a funny thing happened on his way to medical school.

“Since I graduated from Cortland, the opportunities have come along somewhat continuously. The chance to go on to another four years of medical school and three years of residency just wasn’t there because I’m living the dream life.

“We’re off in remote places working hand in hand with locals, typically for weeks on end,” Curtis said. “Working with people who have lived their whole lives in Ethiopia or Mongolia gives you the chance to see the world from a different perspective.”

His worldview also is shaped by his SUNY Cortland experience.

“That critical thinking and looking at the details and perspectives influenced me in everything including interacting with people from different parts of the world,” he said. “It affects how I do my safety work and how I think about risk.”

His experience looking at bees up on the Ethiopian tundra at 14,000 feet recalled for him the course he took on pollinators with Professor of Biological Sciences Steven Broyles.

“My knowledge in how they interact and work was shaped by that class I took probably eight years ago,” Curtis said. “It’s given me — from an ecological and biological perspective — a different take on the world.”